Following Russia’s invasion of Ukraine, the Icelandic foreign minister this week expressed her relief that her country is part of the NATO alliance.

“Thank God we are part of NATO” because the North Atlantic island nation without an army can no longer “take peace for granted,” Thórdís Kolbrún Reykfjörd Gylfadóttir told the Wilson Center on Thursday. 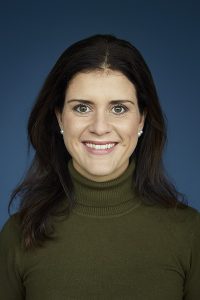 She added, it seems “a long, long time ago” when Iceland, a nation of just over 350,000 people, handed over the chairmanship of the Arctic Council to eight members to Russia in 2021.

It was also the time when new Secretary of State Antony Blinken first met Russian Foreign Minister Sergei Lavrov in Iceland to discuss ways to ease tensions between the two nuclear powers.

Less than a year later, the Kremlin “decided to invade Ukraine because its leaders are threatened by our values” of human rights and democracy, she said.

“Everything has changed now” in Iceland, from her view of herself and the Arctic, to how she sees the region’s place in the world. For the first time, “we really have a discussion on foreign policy”, provoked by the invasion.

The foreign minister said Icelanders recognize “that they are in a strategic place, it’s in our DNA”. They also know that since 2008, NATO has been carrying out air policing missions over the island and waters to ensure the national security of a member country. Iceland’s security forces consist of a three-ship coast guard and four aircraft, but it has worked with NATO to upgrade facilities in Keflavik for aerial policing and maritime security aerial patrols.

“I really thought that part of the story [a large nation in Europe invading a smaller neighbor without provocation] had passed,” added Reykfjord Gyladottir. Speaking as a 35-year-old Icelander, “at least I know where I stand” on defending those values ​​and a rules-based international order that the Kremlin is breaking by attacking Ukraine.

For Iceland to help Kyiv, Iceland joins the denunciation of Moscow’s attack and supports the imposition of tougher sanctions against Russian banks, industry and leaders. It is also stepping up to help countries in other parts of the world that are feeling the impact of war on their grain and fertilizer supplies for their crops.

“We [Iceland] can take more hits” than countries like Sri Lanka, which is facing soaring inflation and dwindling grain supplies made worse by war. She said Iceland was wondering “what can we do [to help] other regions” in this crisis.

Looking back to 2014, when Moscow annexed the Crimean Peninsula, where its Black Sea Fleet is based and where actively supported separatists operate in Ukraine’s Donbass region, she said: “Maybe we should have done something different” that would have averted invasion eight years later. .

The informal motto of the Arctic Council and international discussions on the Arctic before the invasion centered on the idea of ​​”High North, Low Voltage”, but this too radically changed the start of the Russian invasion. The Finnish and Swedish parliaments are seriously considering joining NATO for the first time. She called the talks “sense” between “Nordic friends”.

“Russia can no longer be considered a reliable partner,” even when it comes to Arctic science and research, she said. The foreign minister added that Moscow posed a major threat to the security of Europe, Iceland and North America, with its increased submarine activity in the North Atlantic.

It is unclear whether the Arctic Council can reorient itself without Russia, the nation with the most territory in the region and its waterways increasingly open to shipping. Reykfjord Gyladottir said Finland’s and Sweden’s NATO membership would also change the dynamics of the council’s work, as security concerns for the region’s future would likely come to the fore.

In this crisis, she added that for Reykjavik, “the United States is an indispensable ally and friend”.

As for the Arctic Council at the moment, all seven member democracies, including the United States, are boycotting the organization. Since its formation in 1996, the council has moved away from security issues, focusing on the environment, climate, search and rescue, better telecommunications and the impact of energy development and increased transport sea ​​on the indigenous peoples living in the region.

As the online session ended, Reykfjord Gyladottir called his first visit to Washington, DC, as foreign minister a “win-win” for both nations. She leaves for New York thinking that the sessions with the World Bank were “doing good” on a number of issues, and she “felt good about it.”

Meetings with Pentagon leaders have helped “strengthen and deepen security and defense relations.”

She noted the visit was also “good for NATO” and coincided with the end of this year’s Northern Viking maritime exercise around Iceland. The exercise was led by the US 6th Fleet.