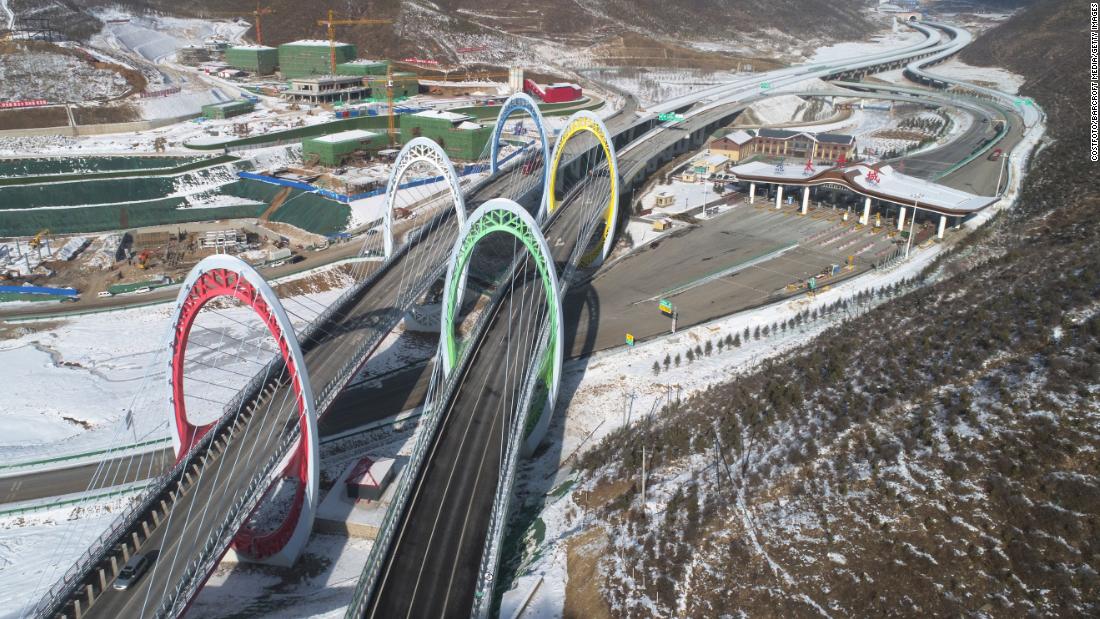 In addition, preparation for the event will come amid a worsening pandemic and ongoing questions about Beijing’s alleged mishandling of the initial outbreak.

After successfully containing the spread of the virus, China is now battling the worst outbreak in more than a year, with the highly contagious Delta variant spreading to half of its provinces. The last thing Chinese leaders want to see is the Winter Olympics become a super-spreader event.

Speaking to CNN, Hong Kong University virologist Jin Dongyan said the success of the Tokyo Olympics shows that hosting an international sporting event during the pandemic is “completely feasible” with careful planning and strict security measures.

The 2022 Winter Games will be spread across three main areas – in the capital Beijing and in Yanqing and Zhangjiakou in the northwest – which are connected by high-speed trains.

Jin suggested that Beijing could use the experience of Tokyo’s organizers to create a bubble around major Olympic sites to prevent the spread of Covid-19.

Tokyo was in a state of emergency during the Olympics, reporting thousands of cases every day. But within the Olympic bubble, few people were infected – with about 400 Game-related cases registered since July 1st.

But while the Tokyo Games went to great lengths to protect athletes from contracting Covid-19, Beijing will likely want to prevent the coronavirus from spreading outward, from the Olympic bubble to local communities.

For more than a year, China has relied on a tough “zero tolerance” strategy to quickly tackle the domestic flare-up. It has also closed its borders to most foreigners. The few who are allowed to enter have to undergo a mandatory hotel quarantine for two to three weeks.

The reopening for the national borders for the first time in two years, even with limited capacity, will therefore represent a massive logistical challenge, not least in terms of accommodation for the athletes.

Jin, the Hong Kong University expert, said the current lengthy quarantine requirement was unsustainable for the Olympics as few athletes would be willing to be trapped in a hotel room for three weeks prior to their events.

In addition, there is the uncertainty of the live audience. The Tokyo Games banned both foreign and local viewers. But the International Olympic Committee said last month that the Beijing Games need spectators to be successful.

“We need and want to have spectators … We want everyone to have the opportunity to enjoy the hospitality and enjoy the great Chinese offers.” said Juan Antonio Samaranch Jr., Head of the IOC Coordinating Commission.
Last week, an expert from the Chinese Center for Disease Control and Prevention told the state Global times Many of the Beijing Winter Games events will be held outdoors, allowing the domestic audience to attend, although it is not clear whether viewers will be subject to additional quarantine measures.

If Beijing allows local spectators, then they too will have to live temporarily in the Olympic bubble – and how could Beijing allow tens of thousands of people to be sealed off for several weeks?

Despite the great uncertainty about such questions, the public is already looking forward to the Winter Games in China. During the Tokyo Games closing ceremony on Sunday, hashtags about the Beijing Olympics were a top trending topic on Weibo, China’s heavily censored version of Twitter, drawing hundreds of millions of views.

“The stadiums are so high quality and great. I hope the pandemic ends soon so I can see the game in person,” said one comment said.
“Covid-19 will become like the flu in the future and we cannot always close the gates of the country. China has not hosted an Olympic Winter Games and this is a particularly valuable opportunity to showcase our broad national strength, ”you read Another.

However, others are concerned about the spread of Covid-19 from the Games, as well as the tough travel restrictions likely to apply.

“Have we forgotten how many of our compatriots died of Covid-19? Why do we have to take the risk for the whole country? There will be all sorts of restrictions on going to Beijing … is your life affected? ”One commentator wrote.

As a result of the “zero covid” strategy, China’s public tolerance for infections remains extremely low. In recent weeks, some prominent Chinese public health experts have called for a change in approach for the country to learn to coexist with the coronavirus, following the path that other countries with relatively high vaccination rates are increasingly taking.

However, China’s former health minister released one on Sunday comment on the mouthpiece of the People’s Daily party, which attacks the idea of ​​“coexistence with the virus”, possibly suggesting official opposition to the approach.

In the article, Gao Qiang, the former minister, accused the United States and the United Kingdom of “disregarding the health and safety of people” and of causing outbreaks to flare up by easing Covid restrictions.

“This is a failure of epidemic prevention decision-making caused by the flaws in the political systems of countries like the US and UK, as well as an inevitable result of their promotion of individualistic values,” Gao wrote.

picture of the Day

On Saturday, a new 88,000 square meter terminal was opened at Lhasa Gonggar Airport in Tibet. The airport is Tibet’s largest air traffic hub and one of the highest airports in the world. The new terminal will “increase passenger and freight traffic significantly” and help the vast Himalayan region to become a “global logistics center for South Asia,” reported the state-run Global Times.

The risky loophole that Chinese companies have been exploiting for years

The Didi IPO debacle highlights a complicated investment structure that is used by many Chinese company this list in the United States.
The concept is known as Variable Interest Entity (VIE) and is popular with Chinese companies that want it Raise money from foreign investors.

How does it work? A VIE uses two entities. The first is a mailbox company based somewhere outside of China, usually in the Cayman Islands. The second is a Chinese company that has the necessary licenses to do business in the country. The two companies are linked by a number of contracts.

Didi uses this structure along with several other large companies including Alibaba, Pinduoduo, and JD.com. The arrangement is explained in Didi’s prospectus, but not everyone is aware of it.

Chinese firms have used the structure for decades because foreign investors are not really allowed to own stakes in local firms in industries such as technology. Nevertheless, Chinese companies want to raise money abroad.

Establishing an offshore holding company that goes public helps Chinese companies bypass these rules. Wall Street and US regulators have long been serene with the deal, which allows American investors to easily get exposure to dynamic companies that power the world’s second largest economy.

But there are huge risks. First, it is not clear whether the contracts that entitle foreign investors to the economic benefits of Chinese companies are enforceable. It’s also not clear whether VIEs are legal under Chinese law.

Didi has the following to say about the agreement: Didi says in her prospectus that her legal counsel is of the opinion that her VIE “does not violate any mandatory provisions of the current PRC”. [Chinese] Laws “and that its contracts are” valid and binding “.

But it also contained a warning to potential investors.

Now there are signs that both Chinese and US regulators are uncomfortable with VIEs. Investors, watch out.