Neither the increases nor the reductions are huge. Based on World Bank datathe $180 billion increase represents only about 4% of total reserves in developing Asia in 2019, while the $95 billion reduction is only 3% for non-developing countries. from Asia.

One of the reasons for the increase in Asia, and the reason why the decline outside of Asia has not been greater, could be risk aversion: things have been bad for the past two years, but governments and central banks may fear they will get worse.

How are foreign exchange reserves changing in the Pacific?

From the fourth quarter of 2019 to the third quarter of 2021, the official reserves of Fiji, Samoa, Solomon Islands, Tonga and Vanuatu all increased by more than 20%, with those of Samoa increasing by 71%. PNG’s reserves also increased, but to a lesser extent, by only 4% between Q4 2019 and Q2 2021. The average increase across the six economies is 34% (i.e. up to Q2, since Q3 data is not available for PNG).

Additionally, most Pacific currencies have actually appreciated slightly during the pandemic against the dollar. These currencies are fixed by the government, and the appreciation is likely caused by movement between currencies (other currencies in these countries’ baskets, against the USD). The PNG kina fell only slightly in 2020, and not at all in 2021. 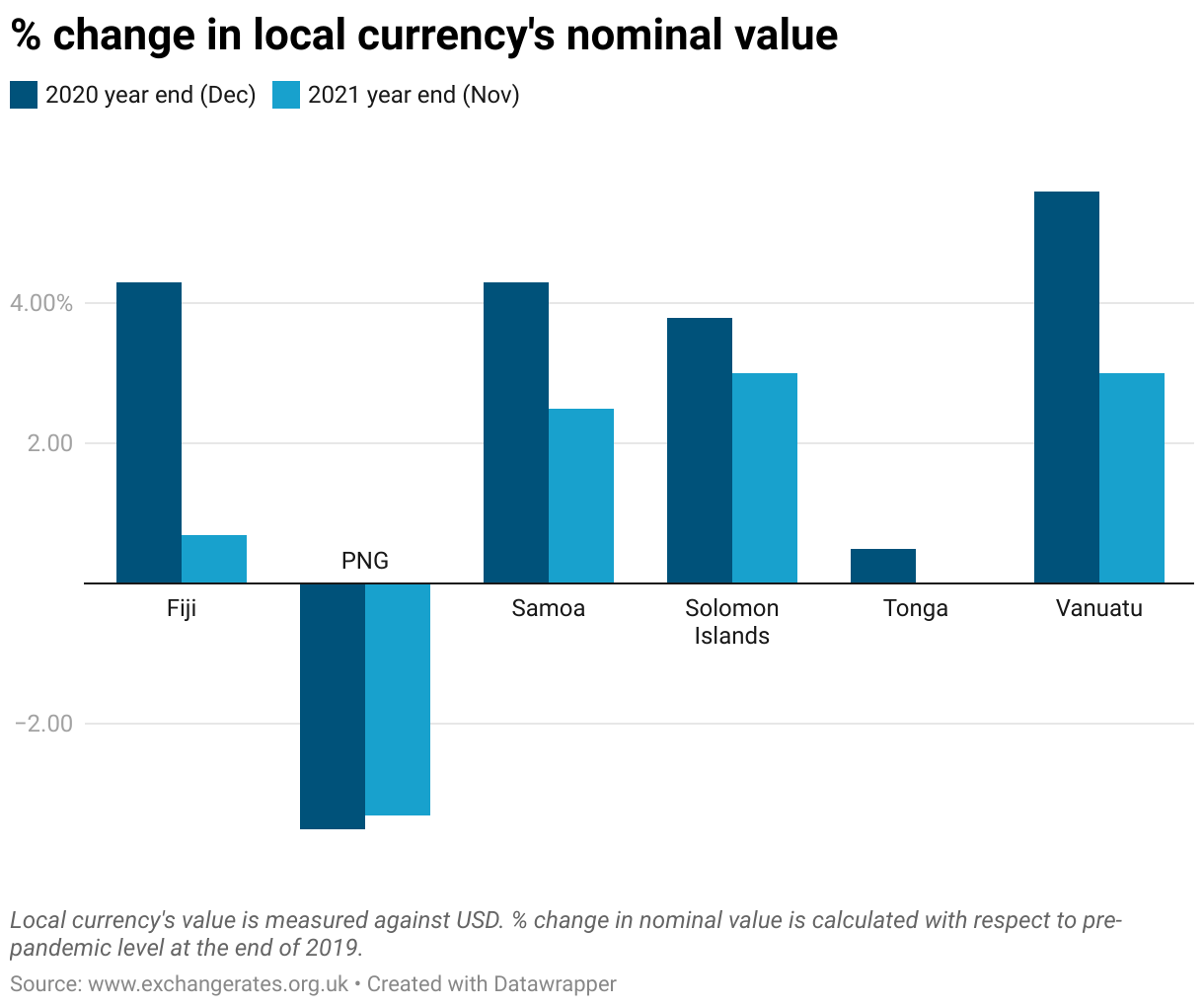 We should start with aid, because the Pacific is the most aid-dependent region in the world. Major donors such as Australia and multilateral agencies have stepped up their special support programs (both aid and non-concessional) during COVID-19. The additional allocation of Special Drawing Rights (SDRs) from the IMF would also have contributed, although the amount is relatively small, to less than 10% of pre-COVID reserves in these countries. PNG, Fiji, Samoa and Tonga have also all benefited from the signing of the Debt Service Suspension Initiative.

To the extent that the accumulation of reserves is financed by debt, there would be an increased risk of a debt crisis. Yet official external public debt reserves increased from Q2 2019 to Q2 2021 in Fiji, Samoa and Tonga, meaning these countries became more able to find the foreign exchange to service their debts. The Solomon Islands and PNG, on the other hand, recorded a decline in official reserves relative to external debt. This is not a problem for the Solomon Islands, as the ratio remains the highest among the five countries. And for PNG, most of the debt taken on has been either very concessional or very cheap. 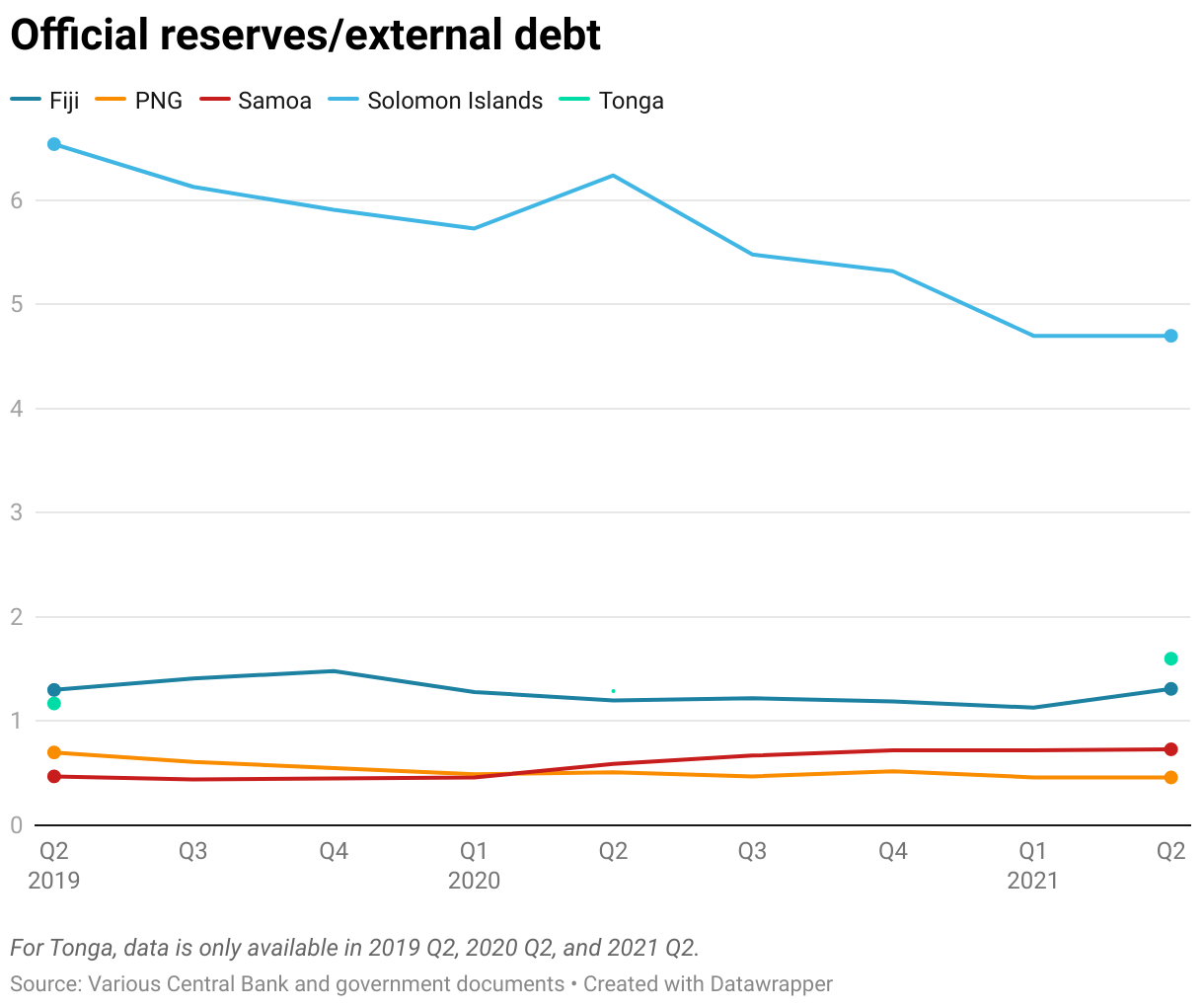 Surprisingly, the trade balances of the Pacific countries have not deteriorated that much. Although Fiji and Samoa in particular are earning significantly less from tourism compared to their pre-COVID levels, their imports have also fallen. Only Samoa’s trade balance deteriorated significantly. PNG’s huge trade surplus tumbled in early 2020 due to falling commodity exports, but recovered as commodity prices rebounded and imports fell. 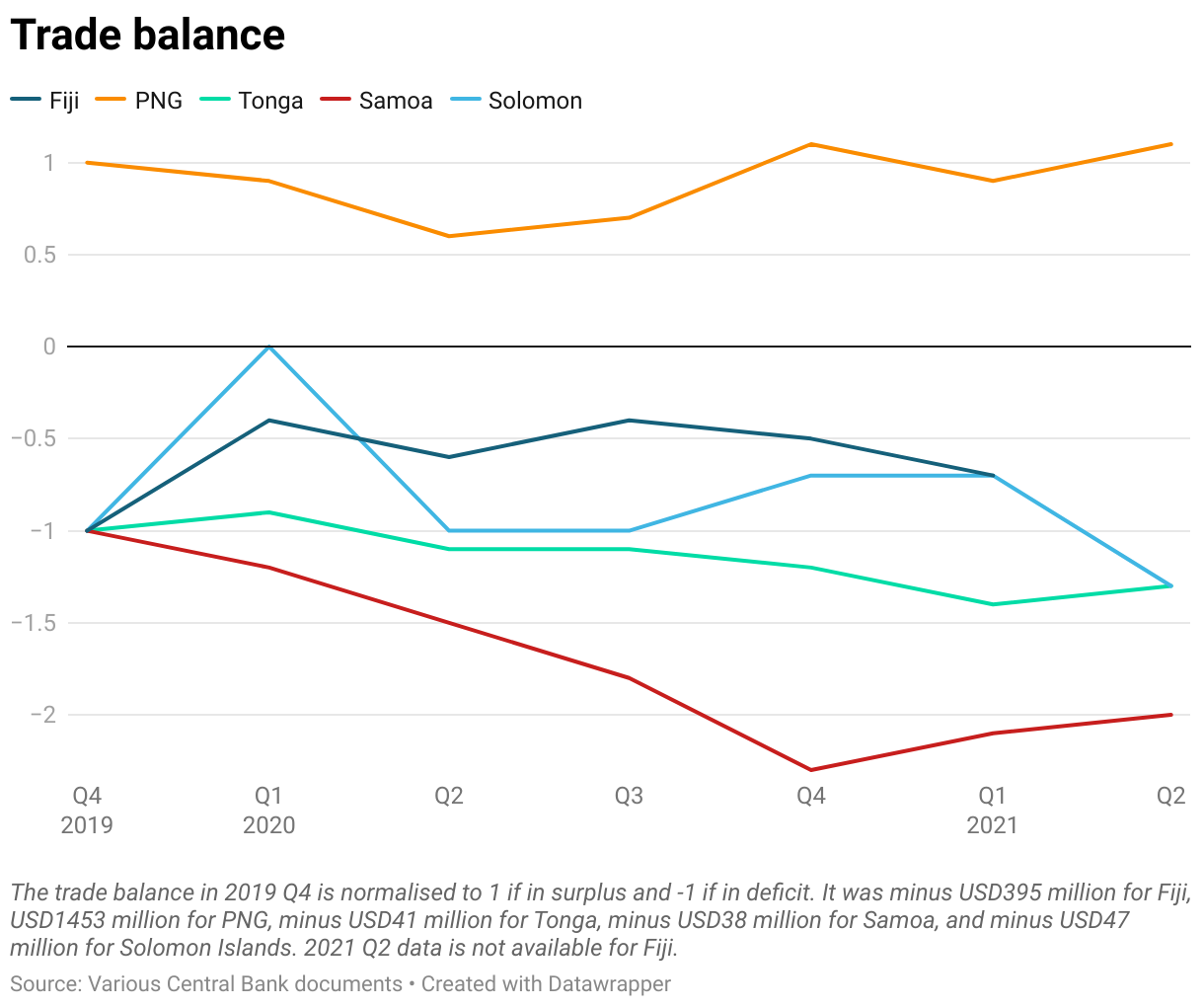 As explained in a previous blog, remittances have defied predictions and increased during the pandemic. As we have already warned, it is unclear whether reported or total remittances have increased. Even if it is the former, it would make remittances more likely to end up at the central bank. 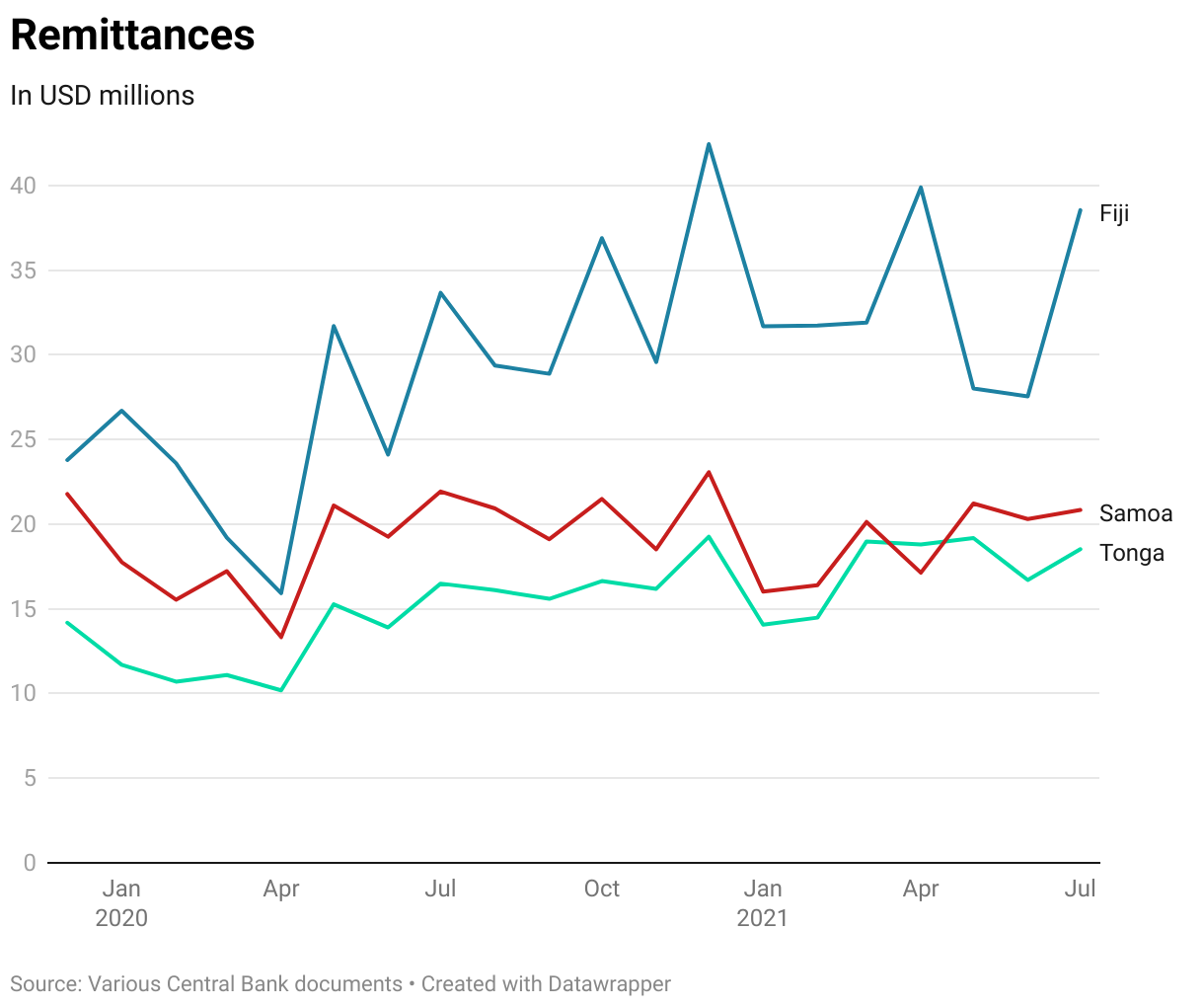 There are also country-specific factors. PNG continues to ration foreign exchange to protect its reserves. And Vanuatu’s citizenship program has continued to thrive.

Overall, whatever other economic problems the Pacific faces, a looming balance of payments crisis is not one of them.

This research was supported by the Pacific Research Program with funding from the Department of Foreign Affairs and Trade. The views represent those of the authors only.