Skip to content
Foreign minister
Vietnamese Foreign Minister Bui Thanh Son (right) and Speaker of the National Assembly of the Republic of Korea Byeong-seug Park during their meeting in Seoul on February 11 (Photo: VNA)

Seoul (VNA) – Vietnamese Foreign Minister Bui Thanh Son met the President of the National Assembly of Republic of Korea (RoK) Park Byeong-seug and Deputy Prime Minister and Minister of Economy and Finance of the Republic of Korea Hong Nam-ki in Seoul on February 11.

President Park said he was delighted with the flourishing relations between the countries in recent years and spoke highly of Vietnam’s role and stature in Southeast Asia.

He said the Korean parliament will support and create the conditions to unceasingly develop and deepen the Vietnam-ROK strategic cooperative partnership in all its aspects.

Minister Son, who was on an official visit to the Northeast Asian country from Feb. 9 to 11, said the ROK is one of Vietnam’s main partners and the parliaments of both countries have played an important role in promoting the strategic cooperative partnership in the recent past.

Noting with satisfaction the increasingly strengthened ties between the two parliaments, he called 2022 an important year as it will open a new stage of development for relations between the countries since the establishment of their diplomatic relations 30 years ago. .

He said he hopes Vietnam and the ROK will successfully use the cooperation and dialogue mechanisms on diplomacy, security – defense and economy – trade – investment; export more Vietnamese products to the Republic of Korea; promote ROK investment in Vietnam; stimulate technology transfer and labor cooperation; and stepping up health care research and development collaboration, with Vietnam receiving the COVID-19 vaccine and drug production technology from the Republic of Korea.

The foreign minister added that Vietnam is willing to maintain close coordination and mutual support with the ROK in multilateral forums and mechanisms. He called for continued defense of ASEAN’s position on the East Sea issue, saying the Vietnamese Foreign Ministry will continue to help strengthen cooperation between the two parliaments.

The host and guest agreed to increase exchanges and meetings of delegations at all levels, especially at the highest level, in order to enhance political trust and cooperation between parliaments, governments and peoples of their countries. 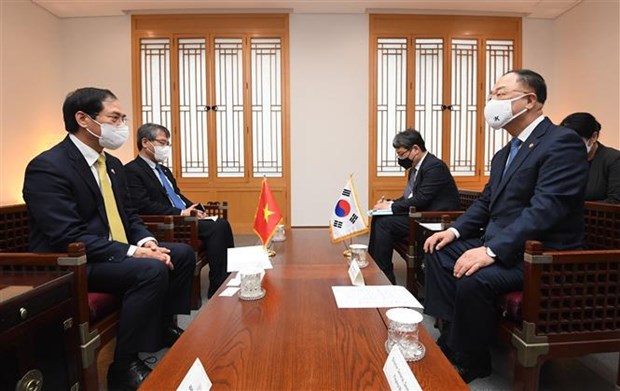 During the meeting with Deputy Prime Minister and Minister of Economy and Finance Hong Nam-ki, Son and his host discussed measures to develop bilateral relations more strongly and more fully in the coming times.

They agreed to effectively implement the Vietnam-Republic of Korea Free Trade Agreement to boost bilateral trade to USD 100 billion by 2023 and USD 150 billion by 2030; strengthen cooperation in the areas of health, culture, education, tourism, labor and people-to-people exchanges; and maintain coordination in multilateral forums and on regional and international issues of common interest.

Vice Premier Hong said the countries have become priority partners for each other, adding that Korean investors want to engage more in major infrastructure projects in Vietnam.

He urged the two sides to maintain and develop strong partnerships in culture, tourism and people-to-people exchanges while actively assisting and ensuring the security and legitimate interests of each other’s citizens.

He also expressed his hope to visit Vietnam soon to co-chair the second dialogue on economic cooperation at the vice-premier level.

On the same day, the Minister met with representatives of Vietnamese people’s associations in the Republic of Korea./.